Dunno about you folks – but I miss bowling the way it was long about 1960.  I’m talking stinky-smelly establishments full of cigarette smoke, the aroma of lane conditioner and freshly-drilled hard rubber bowling balls, beer, and the smell of hot burgers on the grille.  There was the dull roar of conversation, people laughing and yelling at the pins, and the “whack!” of someone kicking a ball return in disgust.  Forget automatic scoring because it wasn’t around yet.  You had to actually think, know how to add, and how to keep score. There was the humble telescore, transparent score sheets, the motion of a grease pencil, and your ability to keep score. The game challenged your math skills.

Seems there was a grand opening every month somewhere.  My father was always dragging us to the grand opening of a new bowling alley around suburban Washington and Baltimore.  There was certainly the heartbreak when one of his haunts – Greenbelt Bowl – burned to the ground from a failed florescent light ballast.  Eventually, he settled in to one or two league nights week when my mother decided to corral him in.  When he couldn’t escape to a bowling league, he hid behind one of his James Michener novels or an Orioles ball game on the TV.

I grew up around bowling – bowling when millions of active league players took the game seriously.  I really am old school.  I love this game the way it was played 60 years ago.  My dad, who was an avid league bowler, had his favorites around Washington and Baltimore.  Where there were tournaments – there was my ol’ man and his bowling buddies.  He maintained a 185 average in those days.  His friend, Ted Wessel, was even better with a 195-200 average in ABC-sanctioned league play. My dad had a textbook four-step delivery.  He was a straight down and in hook player who played the second arrow on the right – solid in the 1-3 pocket.

Admittedly, my father and I did very little together.  We were not close.  What we did together encompassed bowling.  He coached me on Saturday mornings in youth leagues.  Asked me what the hell I thought I was doing out there and, “That’s not the way I taught you to bowl!!!”  We bowled together in adult-youth leagues in the summertime amid air conditioning on hot steamy Maryland summer evenings.  In the cold of winter, we watched Championship Bowling and ABC’s Professional Bowlers Tour, which aired every Saturday afternoon.  ABC’s ever constant, Chris Schenkel, hosted the Professional Bowlers Tour for most of the 36 years it was on the air.  Particularly heartbreaking was watching the ABC Professional Bowlers Tour wrap up with Chris and Bo Burton, their tears and apparent emotion, and saying goodbye. You felt like you knew them – especially after decades on the air together.

I had the good fortune of attending the 1972 ABC Professional Bowlers Tour Fair Lanes Open in Springfield, Virginia – meeting Chris Schenkel and Billy Welu. Welu was a kind gentle tall Texan who knew the game well, providing great commentary and extensive knowledge of the game.  I shook his hand, and Chris Schenkel’s, and let them go to work.  Both were very kind to a snot-nosed teenager from suburban Maryland who loved the game and was lucky enough to be there.  The lights came up, we were instructed on how to behave as an audience, and invited to applause as they went on the air.  It was a dreamy experience for a kid.  We lost Billy Welu to a heart attack in 1974. Thereafter, Bo Burton took the coveted chair and was a Pro Bowlers Tour institution until the last telecast in 1997.

Those of us who grew up in the 1950s and ’60s remember bowling centers as community gathering spots for bowlers and non-bowlers alike.  Bowling centers were cozy familiar places where you could always find a friend.  A lot of lonely souls with nowhere else to go hung out there. We all knew them.  There were the bar flies who sat in the bar and told war stories.  Lies were swapped.  Laughs exchanged.  Second hand smoke was traded.  It was the most original form of social media I can think of.  If you were a serious bowler, you hung out at the pro shop to see the latest from AMF, Brunswick, Ebonite, and Columbia.  Every summer, they’d shut the place down for lane resurfacing, equipment maintenance, and new pins.  New pins always had a high pitch ring, which made bowling louder until they were broken in.  New pins were always livelier.  They reacted more aggressively – it seemed.

I always loved the acoustics of a Brunswick house with A-Model automatic pinsetters with long wooden kickbacks and their unique heavily padded pit cushions.  They yielded a deep rumble of machines and pin action. Someone would nail the 1-3 pocket – ten in the pit – and it would send goosebumps up my spine.  Brunswick machines made a high pitch whine across the house, which was the turret belt slipping around the turret drive. The A-model machines with mechanical triggering were unforgiving of a ball thrown hard.  The ball would hit the pit cushion with so much force it would stall the machine and you’d hear “Blackout on 32…” over the P.A. system in the back.  Troublemakers would keep throwing the ball hard just to stall the machine.  Brunswick refined its pinsetter with electronic triggering and the A-2 rake delay feature.  The Brunswick A-2 was faster and more forgiving than the original A model.  It became an industry standard, which hundreds of thousands of them produced worldwide.  The bowling boom in Japan became so great Brunswick allowed Japan to produce A-2 pinsetters under license. 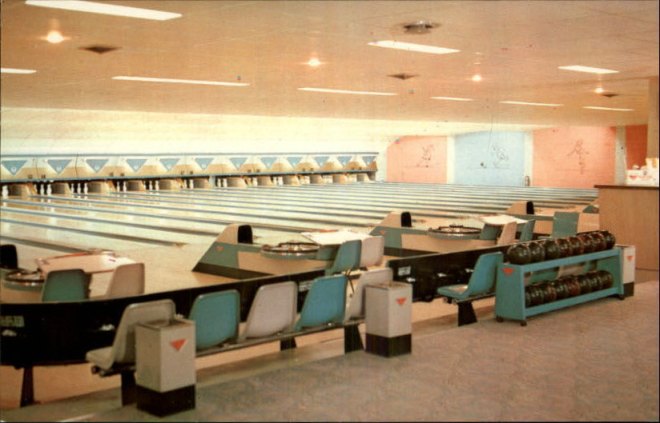 AMF houses of the era were different with their 82-30 model pinspotters – which sounded like a thrashing machine with their clunking, banging, and the sound of pins being distributed into the pinspotting table (rack).  The 82-30 was the world’s first commercially successful pinsetting machine – introduced in 1948.  It would take Brunswick another eight years to get its A-Model into the marketplace – then…the bowling boom was on.

When you consider the bowling boom’s great success 60 years ago, it is sobering to see where it is today.  Today – some 70-80% of all bowling boom establishments are gone.  Those houses you grew up in during the boom where your mom and dad went bowling on Saturday nights are gone – forever…  Consider that for a minute.  Every center where my father league bowled for decades around Washington and Baltimore is gone with one exception – Bowl America Glen Burnie – a cool back-to-back house with 24 lanes on each side. Bowl America in Glen Burnie, Maryland is one of the few surviving houses in the Baltimore area that were originally Colt Lanes – founded by Baltimore Colts star quarterback, the late Johnny Unitas at the cusp of the 1960s. The Colt Lanes enterprise folded, with most of the houses sold to Bowl America and Fair Lanes. 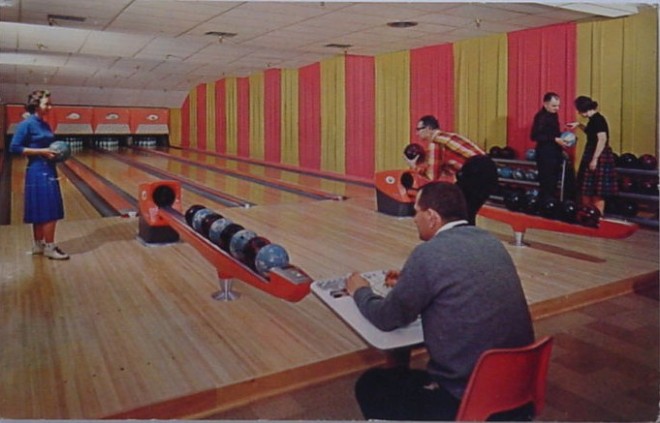 Bowling today isn’t the bowling we grew up with.  Times have changed and so has the game.  Bowling had to change to remain alive.  There are fewer establishments in any given community, which has driven the cost of bowling up.  There are more and more angles designed to get people into bowling centers, which have become more recreational centers with a huge variety of venues for those easily distracted or bored.  Billiards, video games, mini race tracks, restaurants and bars continue to draw the masses when just bowling, billiards, and pinball machines used to pull just fine on their own.  And, if you had a bad evening on the lanes, you could always stop by the bar to numb your pain.

Nonetheless – I always loved the magic of walking into a bowling center I’d never been in before.  For a kid in those days – thrilling.  If it was a chain establishment like Fair Lanes or Bowl America, I always liked to compare houses.  Privately owned houses always had the greatest character.  Some were pretty run down – but were long on personality.  They were typically smaller on the order of 6 to 10 lanes and generally quiet.  On a Saturday night these Mom and Pop houses drew dozens of people who had this weekly event to attend where they could connect with friends.  Bowling centers were good therapy for the lonely.  Always someone to listen and connect with.

Bowling has changed dramatically.  However – the social atmosphere of a bowling alley hasn’t.  These establishments are still around though admittedly in a different format.  Your challenge is to assimilate to a fresh environment and figure out a strategy for dragging your friends to just such a place.  Reach out and groove in for a renewed look at life. Ken-Cliff Bowling Lanes in Ardmore, Oklahoma is but one example of what’s out there for bowling nostalgia buffs looking to relive their youth.  There are countless other examples around the country that haven’t changed. 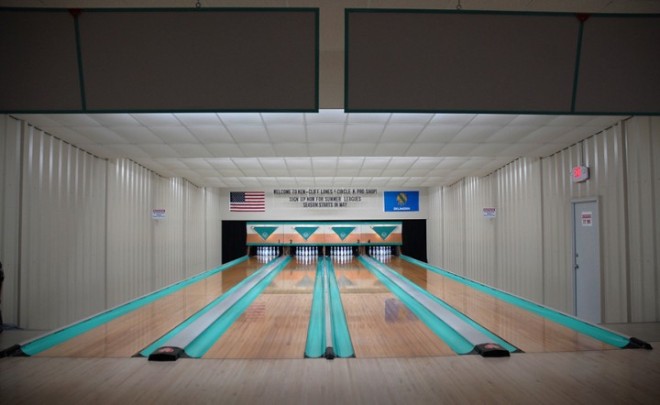 2 thoughts on “Bowling…Back In The Day…”